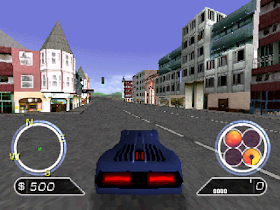 Genre: Action, Racing / driving
Perspective: 1st-person, 3rd-person
Gameplay: Shooter
Setting: Sci-fi / futuristic
Published by: Electronic Arts
Developed by: Neurostone
Released: 1998
Platform: PlayStation (PSX, PS1)
The protagonist of the game is the champion of car racing. Everything is fine, he has a loving wife and a smart daughter. Everything is fine. One fateful day, the protagonist of the game witnesses the murder of his family by the fanatical cult Disciples of Lazarus. The protagonist vowed that it would not take revenge for the death of his wife and daughter. A mysterious organization striving to destroy the cult of Disciples of Lazarus, takes the main character to work. Here, in fact, the game begins. The hero of the game must perform various tasks / missions on a specially equipped car. One round / level consists of several small tasks. As you play, you will have to refuel and replenish ammunition. Missions will be diverse, somewhere to get there, blow up something, help someone. You won’t be bored.
‹
›
Home
View web version