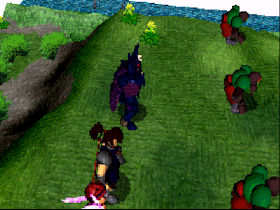 Genre: Role-Playing (RPG), Strategy / tactics
Perspective: Bird's-eye view
Pacing: Turn-based
Setting: Fantasy
Published by: SEGA of America
Developed by: Micro Cabin Corp
Released: 1996
Platform: SEGA Saturn
You are Aragon, the prince of Mystaria. Long time ago, your father was one of the twelve mighty warriors who opposed Sith, the evil being that once tried to open the sacred portals of Mystaria. In the ultimate battle, your father was slain by Sith, but his eleven companion captured the villain and banished him, depriving him of his forces. Sith spend many years in a remote prison, until he grew powerful again. Now he came back to Mystaria and took over the kingdom. It is now up to Aragon to find eleven companions in order to be able to defeat evil again.
This is a strategy RPG along the lines of Shining Force series. Your party contains twelve characters, six of which can be used in battles. The turn-based battles are long and strategic - you move your characters on the battlefield, and the force of your attack depends on the amount of previous movement made by you. You can also use a variety of magic spells to hurt many enemies at the same time.
‹
›
Home
View web version