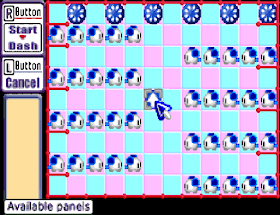 Genre: Action, Puzzle
Perspective: Top-down
Visual: Fixed / Flip-screen
Published by: SEGA of America
Developed by: Sonic Team
Released: 2001
Platform: Game Boy Advance (GBA)
Once upon a time on a distant planet lived thousands of space mice ChuChu. They lived happily ever after until one day KapuKapu (space cats), hungry and about to eat ChuChu, entered their space port. To survive, mice must escape from the cats and escape by flying on rockets.

In ChuChu Rocket! the player’s goal is to bring one or more ChUChu mice through the field-level to the specific points on which the rockets are located. At the same time, it is necessary to avoid KapuKapu cats, which also move in level. Mice always move only in a straight line, when they hit an obstacle (wall), they always turn right; if they find themselves in a dead end, turn around and run back. Cats move in the same way, but a little slower. If KapuKapu collides with ChuChu, he will eat them, and if he touches a rocket, he will destroy it, and one third of the total number of mice will be lost.
Players can control the direction of movement of ChuChu and KapuKapu by setting at the level of four directional arrows (each player has his own arrow color: blue, yellow, red or green). Arrows cannot be placed on the arrows of other players or on top of their own arrows. Mice and cats advancing on the arrow will follow in the direction in which it points. ChuChu can step on the arrow an unlimited number of times, however KapuKapu can walk on one arrow only two times, after which it disappears. Arrows also disappear over time, previously blinking.
Both mice and cats will disappear when they fall into the pit, but will reappear on the corresponding hatches (on the blue - ChuChu, on the red - KapuKapu). At the same time, only a certain number of mice and cats can be present at the level, for example, at least one KapuKapu should always be at the stage.
From time to time, special colored ChuChu will appear on the level. Golden mice will add 50 ChuChu to the player’s rocket, while the appearance of pink and red mice produces different results. This can be an increase or decrease in speed, the disappearance of KapuKapu for a while and an increase in the number of ChuChu, the ability to arrange arrows differently, moving players' missiles in random order, and so on.

After passing through some modes, the characters of Chao from the series of games Sonic the Hedgehog and Naitopians from the game Nights into Dreams ... will be unlocked, but it is possible to download other characters.
‹
›
Home
View web version