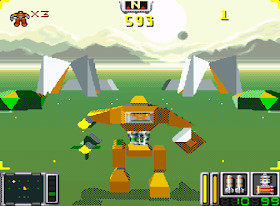 Genre: Action, Racing / Driving
Perspective: Behind view
Gameplay: Shooter
Vehicular: Mecha / Giant Robot
Published by: Electro Brain Corp.
Developed by: Argonaut Software Ltd.
Released: 1994
Platform: Super Nintendo (SNES)
One of the best representatives of polygonal graphics in 3D. In some aspects, it is much like Star Fox on the same system, but also with its distinctive components. You are the pilot of a giant robot that can transform into several forms, each with its own attributes. Your main form of Walker is more useful for reconnaissance and defense. Land Burner is a powerful machine that can plow land ranges very quickly. Sonic Jet jet fighter, which will help get to areas not accessible to other forms of transport. The last form is Hard Shell, which has powerful armor. It moves very slowly, but can energize with the help of solar panels. You will find application for each transformation, as you will have to fight all the time, without respite, shooting everything that will be possible to destroy. The graphics are very high quality, except that the enemies do not look quite original. One of the best points of the game is optimistic and lively music that gives real pleasure in the whole game. The remaining sound effects will consist of firing and shooting, as well as all kinds of explosions. Management is very responsive. The game makes excellent use of the capabilities of the Super FX chip, presenting to our attention a worthy action sci-fi.
‹
›
Home
View web version