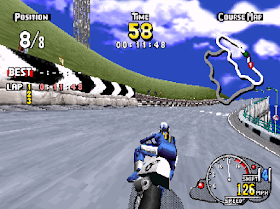 Genre: Racing / Driving
Perspective: 1st-person, Behind view
Interface: Direct Control
Vehicular: Motorcycle
Published by: SEGA of America
Developed by: Sega AM3 R&D Division
Released: 1997
Platform: SEGA Saturn
The game features the annual Tourist Trophy race held on the Isle of Man. The game features two types of Laxey Coast Race races for beginners, and the Isle of Manx TT race for advanced players. The latter is a faithful reproduction of the race, while Laxey Coast is a creation from scratch from the developers, although the sets are actually from the Isle of Manx.
‹
›
Home
View web version