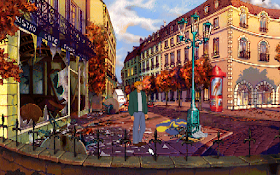 Genre: Adventure
Perspective: Side view
Gameplay: Puzzle elements
Interface: Point and Select
Narrative: Detective / Mystery, Romance
Published by: THQ Inc.
Developed by: Revolution Software Ltd.
Released: 1998
Platforms: PlayStation (PSX, PS1), DOS
The history of the Knights Templar is very interesting and mysterious. As is known from history, immediately after the first crusade, the Order of Warrior Monks came to protect the pilgrims who wandered on their way from Europe to the liberated Holy Sepulcher in Jerusalem. At first, there were only 9 people in the order - religious knights. But years passed, the popularity of the order increased, and the number of its supporters increased. Finally, the Order was officially recognized by the Pope as the Order of the Poor Knights of Christ and the Castle of Solomon. In short, the Templars were recognized, they began to receive tremendous help in the form of money, land, property and other goods, so they quickly turned into a powerful and rich organization, which became, in essence, an excellent modern banking system. Not bad, huh? The Templars, according to legend, also became the owners of many priceless religious relics, such as the Holy Grail, Crown of Thorns and the Head of John the Baptist. And such prosperity lasted almost 300 years until 1307, when the French king Philip IV the Beautiful, who was denied his desire to become a member of the Templar Order, officially banned the Order and declared its members heretics (and burned its commanders at the stake!). And only he did this, as all the Templars (well, whom they did not burn), their fleet, treasures, precious relics and everything that many hoped to profit from, instantly disappeared. Their location remains a mystery to this day! And the Curse of the Tapliers for the entire dynasty of Valois and Philip the Beautiful? It has come true!
The player acts as the American traveler George Stobbart. On his way to France, George finds himself involved in an international adventure involving the search for a medieval manuscript belonging to the mysterious religious order of the Templars.
Here's what a fascinating story underpinned this adventure game. Here you may not notice the quality of graphics, animation, and everything else! But it’s worth noting - the developers created an amazing, almost cinematic (and interactive!) Game in the best traditions of the genre!
‹
›
Home
View web version