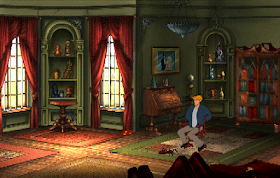 Genre: Adventure
Perspective: 3rd-person
Gameplay: Graphic Adventure, Puzzle elements
Setting: Contemporary, Europe, South America
Interface: Point and Select
Narrative: Detective / Mystery
Published by: Crave Entertainment
Developed by: Revolution Software Ltd.
Released: 1999
Platform: PlayStation (PSX, PS1)
The game contains some great moments and a very high-quality plot. Often the screens are simply pleasing to the eye, while you are looking for objects to pass the new adventure of George and Nico. And some of George's remarks will cause you a storm of laughter. For example, if you show someone a pair of knickers that Georg will have to find during the game, you will not be disappointed with the reaction of the people. The gameplay has also been improved since the first part, and the ability to combine items in inventory makes the game difficult to complete. Control has also been improved. Now you can quickly move the cursor around the screen using the gamepad or you can use the mouse for the PlayStation. However, the game has a disadvantage characteristic of games of this type. The body of George, as well as other heroes, sometimes closes the item that you need to find, and this prevents you from seeing that the cursor changes. Another drawback of the game is that some objects are too small and it is difficult to understand what they are, even if you use an S-Video cable. But if you are a fan of such games, it will give you a lot of fun.

The game begins a couple of years after the end of Neo-Templars. You again "play" George Stobbart, an American abroad, assisted by French journalist Nicole Collard "Nico". An investigation into the Central American Crime Syndicate takes our heroes to the very heart of a gang of ruthless drug dealers. Along the way, they reveal the medieval secrets of the Aztecs and ancient Mayan civilizations.
‹
›
Home
View web version