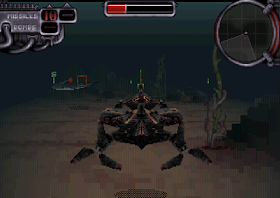 Genre: Action
Perspective: 3rd-person
Vehicular: Mecha / Giant Robot
Gameplay: Shooter
Setting: Sci-Fi / Futuristic
Published by: SEGA Corporation
Developed by: Scavenger
Released: 1997
Platforms: SEGA Saturn, DOS
The objective of the game is to complete missions aboard a curious war machine.
Amok is located in a futuristic scenario located on a planet, which is identified in the manual with the same name. There are two gigantic corporations, referred to as NONLUN and AZTK, which have been at war for 47 years. This war has involved various fronts and scenarios, including operations in the air, surface on land and water, and in the depths of water. Recently, a peace agreement has been reached. In the manual, this agreement is described as "a sheet that covers the fire that burns in people's hearts." The agreement is unstable enough to influence a mercenary company, known as "the Bureau," which has decided to employ the war pilot named Gert Staun, to restart the war so he can continue to profit from the contracts of both corporations. The player takes the Gert Staun roll.
‹
›
Home
View web version