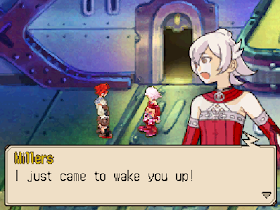 Genre: Action, Role-Playing (RPG)
Perspective: Top-down
Setting: Fantasy
Published by: Nintendo Co.
Developed by: Monolith Software
Released: 2008
Platform: Nintendo DS (NDS)
A player group consists of three members. The battle takes place in real time, without moving the group to a separate screen (a similar combat system is used in Secret of Mana and Diablo). In addition to the destruction of monsters and advancement of the plot, you will be offered additional tasks and bosses, and with them rewards. In many locations there are teleports, which will transfer your group to the city or another point with teleport.

Each class has its own limitations on what weapons can be equipped. At the beginning of the game, you choose the necessary set of weapons that you later use until the end of the game. For each weapon there are skills that can be learned and used. In addition, each equipment has a rank. If your rank is not high enough, you can not use this equipment. With a level you get AP (Ability Points), and you can use these points to learn or gain the necessary skills. In each skill you can invest no more than 20 points.

As you level up, you get not only APs, but also CP (Character Points), which can be used to increase four basic characteristics. Thanks to them, physical and magic attacks can be increased, as well as the maximum number of HP / SP. The maximum number of points of one characteristic can reach 255, while HP and SP have a limit of 9999 units, an attack speed of 170% and finally a running speed is limited to 180%. Equipment does not help you bypass the limit of 255 points, you simply lose the extra points.

This world is known for being ruled by the magical energy "Soma". Many technologies work on it, and also people use it for their own personal purposes. In recent years, the natural balance of Soma energy on the continent has been destroyed by strange creatures called "Visitors". To explore these creatures, the Secundadeians - the organization that regulates Soma in the world, creates a military unit called the 7th Division. What they have to find and change will change the fate of the whole world ...
‹
›
Home
View web version