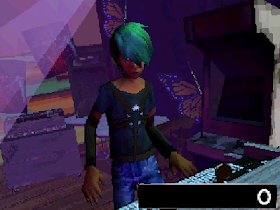 Genre: Simulation
Gameplay: Music / Rhythm
Published by: MTV Games
Developed by: Backbone Emeryville, Harmonix Music Systems
Released: 2010
Platform: Nintendo DS (NDS)
As in the other games in the series, Rock Band 3 allows players to imitate a rock band and other genres using special controls that mimic the guitar and electric bass, drums and a microphone for vocals. Rock Band 3 improves on previous games with the inclusion of 3 vocal harmonies previously used in The Beatles: Rock Band and Green Day: Rock Band and adding support for a 25-key MIDI keyboard.
Rock Band 3 presents a new "Pro" mode, which is designed as a learning tool to accurately imitate how to play with real instruments: Guitar and bass players will have to type specific frets and strings, drummers will have to Paste pads that simulate cymbals in addition to the box, the toms and the bass drum. The keyboardist will have to type accurately on the entire keyboard. MadCatz and Fender will be building controls and add-ons to improve Pro mode. Harmonix's introduction of the keyboard and hardware for Pro mode were made to make Rock Band 3 an "innovative" title to revitalize the pace of the market after the poor titles of 2009 and to continue with the efforts and objectives of Harmonix to incorporate real instruments in video games.
The game includes 83 songs, many selected for the good use of the keyboard. Game content, including downloadable content and songs from the Rock Band Network reach 2,000 songs by the end of October 2010. Rock Band 3 is redesigned to take advantage of players' existing song lists by providing song lists created by the same user, with simple tools to search and select songs.
Rock Band 3 was released on October 26, 2010 in North America, October 29 in Europe and October 28 in Australia and New Zealand. It is available for the Xbox 360, PlayStation 3, Wii and the Nintendo DS.
Critics cheered the game, praising the addition of the keyboard that expands the potential of the music library of the game series and the renewed structure of the race to keep players playing the title. The Pro mode was particularly highlighted by critics, who pointed out that the new mode manages to bring gender closer to effective learning to learn to play real instruments despite their high cost.

Anthrax - "Caught in a Mosh"
Big Country - "In a Big Country"
The Cure - "Just Like Heaven"
Def Leppard - "Foolin’"
Devo - "Whip It"
Dio - "Rainbow in the Dark"
Dire Straits - "Walk of Life"
Echo & the Bunnymen - "The Killing Moon"
Huey Lewis and the News - "The Power of Love"
INXS - "Need You Tonight"
J. Geils Band - "Centerfold"
Joan Jett - "I Love Rock N’ Roll"
Night Ranger - "Sister Christian"
Ozzy Osbourne - "Crazy Train"
The Police - "Don't Stand So Close to Me"
Roxette - "The Look"
The Smiths - "Stop Me if You Think You’ve Heard This One Before"
Tears for Fears - "Everybody Wants to Rule the World"
Whitesnake - "Here I Go Again"