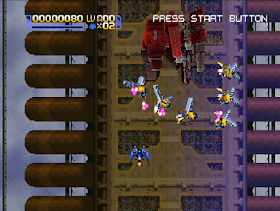 Genre: Action
Perspective: Top-down
Visual: 2D scrolling
Gameplay: Arcade, Shooter
Published by: Entertainment Software Publishing Inc.
Developed by: Treasure Co.
Released: 1998
Platform: SEGA Saturn
Radiant Silvergun features a unique and innovative weapon system with seven weapons available at any time. The player has three buttons to control the weapons; the triggered weapon depends on the combination of buttons pressed. According to the producer Hiroshi Iuchi, the main inspiration for the design of the game was the Image Fight, an arcade game, of 1988, made by Irem.
Unlike most shoot 'em ups, there are no power ups. All weapons are available from the start. However, weapons can "level up", becoming more powerful as the player uses them to increase their score. There are a selection of seven weapons that can be used at any time. The game rewards players by hitting multiple enemies from only one of three colors: red, blue, or yellow. Whenever the player eliminates three enemies of the same color, he can get a bonus points. This also facilitates a faster weapon upgrade.
The game is designed to be almost always a "right" weapon for any situation. The bosses of the game are designed to have multiple "sections" that, if they are all destroyed before the "core" of the boss, will reward players with bonus points. Being able to apply the right weapons to different bosses is essential to getting these bonuses. For example, a boss may have two sections located on either side of the screen. You could immediately go to one of them and start shooting with the vulcan, or hover in the center and hit both at the same time with the side bombs. This would increase the chance of getting the bonus before the time limit runs out and the boss self-destructs.
‹
›
Home
View web version