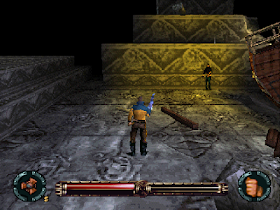 Genre: Action, Role-Playing (RPG)
Perspective: Behind view
Gameplay: Puzzle elements
Setting: Sci-Fi / Futuristic
Published by: Psygnosis Limited
Developed by: Psygnosis Limited
Released: 1998
Platform: PlayStation (PSX, PS1)
A remote fantastic country, and you are one of the crew members of the Nautilus airship, carrying a magic ball (Pearl) to stop the nightmarish epidemic that struck the mystical city of Calli. But suddenly a catastrophe occurs (to be more precise, it was provoked by the vile forces of darkness) - and your ship crashes into a mysterious, incomprehensible from somewhere, taken tower. And you, as one of the 4 crew members: a soldier, a female warrior, a lone mercenary and a sorcerer, each with their own set of missions and their own weapons. They must break through 8 huge levels of the tower. It is here that you will learn that a gang of mutants specially arranged this catastrophe in order to take possession of the magical Pearl.
The game is a kind of fusion of RPG (role-playing game) and style of Action (in the spirit of the games Tomb Rider), with the possibility of full control over the situation. You are opposed to over 40 vile creatures against which you can use 16 spells, 4 types of weapons with 9 types of action. Eight levels of the game with more than 7 sectors in each will not allow you to relax and you will have to accept the fact that you will die very often (mainly due to the fault of not very successful management of the current character). Separately, I want to mention the IQ of enemies. They know how to react to the situation and your appearance and do not rush to the line of fire, and rush to you, hiding behind numerous obstacles. The graphics in the game is excellent. Clear textures, real-time lighting, morphing - all this is in excess in the game.
The only complaint to the developers (but very substantial) is the very high complexity of the game. And the difficulty is not even in passing the levels, but the fact that the controller does not always adequately respond to your commands and as a result you die for nothing. In addition, you do not indulge the opportunity to save the game whenever you want, but only in specially designated areas, which are not so common. By the way, the game does not start if you do not have a memory card inserted in the console (at least in my version). In general, the game is original, beautiful and very gloomy.

The secret character of The EX-Deviant

At the main menu, press R1, R2, L1, L2 and you will hear a sound. Ex-Deviant will be at your service when you go to the character selection screen.

These codes are entered during the game, in Pause mode

Pause the game and enter the following code: Circle, Triangle, L1, L2, R1 and hear the sound. Press the Select button to get to your status screen. You will find a filled green indicator, which can be distributed on different indicators. If you repeat this procedure several times, then raise them to the maximum.

Pause the game and enter the following code: R1, L1, R2, L2, Left, Right, Up, Down, you will hear a sound. Press the Select button to get to your status screen. You will see to what extent your weapon has improved. Repeat this operation several times for new enhancements.

Pause the game and enter the following code: Down, Triangle, SELECT, L1, R1, Select hear the sound. Press the Select button to get to your status screen. You will see that your spells are greatly improved. Repeat this process several times to make them even more powerful.

Absolute ending of the game is possible only when passing the game on the Hard difficulty level.
‹
›
Home
View web version