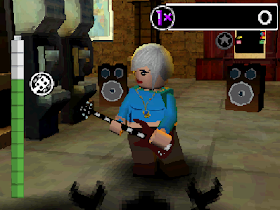 Genre: Action
Perspective: 3rd-person
Gameplay: Music / Rhythm
Published by: MTV Games, Warner Bros. Interactive Entertainment Inc.
Developed by: Backbone Entertainment, Harmonix Music Systems, Inc., Travellers Tales (UK) Ltd.
Released: 2009
Platform: Nintendo DS (NDS)
The gameplay of the Lego Rock Band is similar to the rest of the games in the Rock Band series, however in this game you can create your own character from the LEGO bricks. The soundtrack of the game includes 45 songs, which, according to the developers, were selected to create a family game. The game also supports downloadable tracks from other games in the series, other than Rock Band 3.
Lego Rock Band has been met mainly by positive reviews from critics. Many reviewers noted the unusualness of the game, but there were also those who criticized some of the new features that, in their opinion, contradicted the target audience of the game.

Lego Rock Band is based on the same gameplay as the rest of the Rock Band games, although it has some innovations, such as creating your own musician. At the beginning of each song, the player is given the opportunity to choose the level of difficulty: "super easy", "easy", "medium", "difficult" and "expert". Control of the game is made using 3 special controllers: guitars, drums and a microphone. Players imitate the performance of music using these controllers to play notes passing through the screen (shown as LEGO bricks). The guitar requires clamping the colored keys (frets), as well as striking a key that imitates a string. For the drum set, you need to beat the appropriate drum in color and press the pedal to play the bass drum. A microphone is used to perform vocals. A player can sing in any other octave regarding the vocal part represented in the song. A special indicator displays the accuracy of the artist compared to the original. For a successful hit in the notes to the player, points are added that replenish his "energy phase". When the player's phase is full, it is possible to activate the overdrive mode, which increases the number of points. For a certain number of points received during the song, the player is assigned a star. If a player fails to hit the notes, the "energy phrase" gradually loses points. When the "phrase" is completely emptied, the player leaves the game, which also results in a decrease in the final score and the entire group.

The main game mode - "Story Mode", is arranged in the same way as "Tour Mode", which was present in other games of the Rock Band series. In this mode, the player goes on the career ladder of a rock musician, starting with concerts. At the end of each concert, players receive various objects that they can use to change their character, "rock sanctuary," or buy new musicians. There are also special concerts in the "Story Mode" called “Rock Power Challenges” where players can use their “rock power” to perform a task, such as tearing down a building or running away from a dinosaur.
The game also has a "Free Play" mode, allowing the player to play any selected song.

The game version for Nintendo DS is similar to Rock Band Unplugged for PSP and Rock Band 3 for Nintendo DS. The main difference of the DS-version of the game is that the player plays the game for all four members of the rock group. On the screen in the foreground is a neck with four tracks and a panel with buttons. During each song the notes move along the tracks. When the notes reach the panel, the player must press the corresponding track button. After successful execution of the party of one instrument, the player must switch to another. If the note was missed, then the game played does not count. To control the Nintendo DS player must use the touch screen and front buttons of the console. Any peripherals in the game are not used.
‹
›
Home
View web version