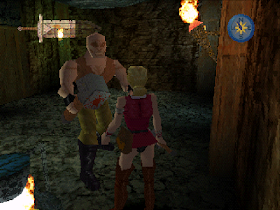 Genre: Action
Perspective: Behind view
Interface: Direct Control
Setting: Fantasy
Published by: Telstar Electronic Studios Ltd.
Developed by: Tempest Software Ltd
Released: 1997
Platform: PlayStation (PSX, PS1)
At first glance, this game is very similar to Tomb Rider, well, just a double. However, there are magic spells, special techniques, a lot of powerful opponents, and generally all sorts of fascinating tricks - you will not be disappointed. Excalibur 2555 A.D. - a typical adventyura, and players use the most diverse weapons - from a huge sword to cyborgs armed with plasma guns from 2555! Together with the famous magician and magician Merlin, the players are pursuing the thieves who stole Excalibur from the rightful owner. Players, moving from dungeon to dungeon, fight with enemies, talk with friends and everything in order to regain lost. They not only swing the sword, but also cast magic spells. And they can even choose their own adventures! Players can learn vital information from the inhabitants of urban dungeons, on which path to go, where to pick up, etc.
The graphics in the game are 3D, the quality is excellent, various lighting effects nicely adorn the game, and there are as many as fifty characters (friends and enemies). The system of objects and spells built in Tomb Raider. They can be saved and used at the right time, squander or sell to another hero. By clicking the Select button and selecting Inventory and Map, players will be able to use the purchased items. In addition, during the game you need to solve many different puzzles. Some of them (especially at first) are simple, but then you will need sharpness and patience.

You probably think that the enemy is difficult to send to the next world? But those who regularly kill these filthy guards of Horta or even the giant Kala Knight think otherwise.
The key to victory is simple. First, do not be mad with the Gamepad, meaning, do not pound on it like crazy. Approach the enemy carefully, be it Ort Guard or Kala Knight, or even Mad Mick. Apply a quick circular blow with the sword, then immediately press the button and hold it (about a second), then release. Keep doing this until you finish off the enemy. With each blow you will inflict wounds to the enemy. However, do not get damage in the fight. Some enemies fall after the first strike, however, this may not be enough. Dump on them and finish it completely.

Any game like Action / Adventure cannot exist without tricks - that’s a fact. Especially when it is terribly unwilling to start the game again from the first levels. This is a common thing, so we will offer you four excellent tricks that will be very useful and, perhaps, solve the problems that arise. So…
During the game, press Start to pause the game, then type the following codes:
Then, after entering the code, select Continue and press X to activate the code. Or just click Start.
Note! You can enter only one code (at a time). Act like this. Trick - return to the game - again Trick and so on.