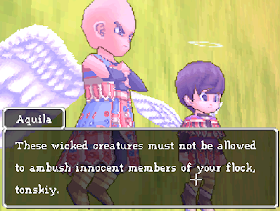 Genre: Role-Playing (RPG)
Perspective: 1st-person, 3rd-person
Art: Anime / Manga
Pacing: Turn-based
Setting: Fantasy
Published by: Nintendo of America Inc.
Developed by: Level-5 Inc.
Released: 2010
Platform: Nintendo DS (NDS)
DQ9 is largely made for multiplayer mode and introduces several unprecedented innovations in the series. In particular, for the first time, the numbering part of the main ruler is focused on a pocket console as a platform, for the first time there is no system of random encounters with monsters - all opponents are visible, and clashes with them can be avoided if desired. For the first time, the menu interface of the Japanese version has become completely graphical. In addition, the ninth part was originally created in such a way as to be significantly more difficult than the previous games in the series, both the main and numerous spin-offs.

The plot describes the adventures of a young angel, who for some unknown reason was dropped on the ground and turned into an ordinary person. The hero is generated at the discretion of the player, it is possible to choose the gender, skin color, hair and other attributes of appearance. Later, after some development of the story, the character can assemble a team with a maximum number of up to four people - the joining heroes can either be created by the player from scratch or selected from existing ones. There is an interesting system of "grottoes", optional for the passage of dungeons that the player must search with the help of special treasure maps.
‹
›
Home
View web version