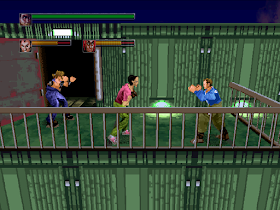 Genre: Action
Perspective: Side view
Gameplay: Arcade, Beat 'em up, Fighting, Quick Time Events (QTEs)
Published by: SEGA of America
Developed by: Sega Technical Institute, Sega AM1 R&D Division
Released: 1997
Platform: SEGA Saturn
According to the plot, the main characters of the game, John McClane and Chris Thompson, plan to save the daughter of US President Caroline Powell from terrorists. The player passes the levels alone or together, on the way facing enemies. Opponents can be attacked with both hands and feet, and with the help of weapons, found and picked up after battles, or health kits for health. However, all the collected inventory (except for the pistol) at the beginning of each level disappears, and the player has to collect everything according to the new one. When a character moves through rooms, a small intro is displayed on the screen, which uses the interactive Quick Time Event system: a player must press the key combination displayed on the screen for a certain period of time to defeat the enemy or avoid injuries. If QTE fails to perform for heroes, the bar with the level of health decreases.
At the end of each level there are battles with bosses: it can be biker Hog, Mexican wrestler Jocko, twin brothers Oishi and Tubbs, Spiderbots robots, and Wolf "White Fang" Hongo. Although there are several endings in the game, the final boss will always be Wolf Hongo, and it is with him that the player will fight on the roof of a skyscraper.
The Sega Saturn and PlayStation 2 version of the game includes an old Deep Scan arcade game in which you need to destroy the submarines and get extra lives for it. On the remaining platforms, the player is given only three lives for passing, and in the event of their loss, the game begins anew.
‹
›
Home
View web version