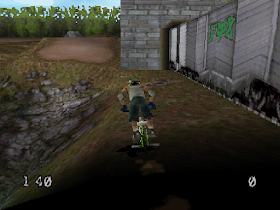 Genre: Sports
Perspective: Behind view
Gameplay: Tricks / Stunts
Vehicular: Bike / Bicycling
Published by: Acclaim Entertainment
Developed by: Z-Axis, Ltd.
Released: 2000
Platform: PlayStation (PSX, PS1)
After the failure of Skate and Destroy (who would be able to compete with Tony Hawk's Pro Skater!), Z-Axis did not lose heart, but applied the developed technology in a different way - in BMX. Fortunately, Activision performed rather poorly in this field, and quite late, which allowed Z-Axis to wrestle the palm for the title of the best BMX simulator on PS1. In terms of management, everything is very similar to THPS, but instead of flips, there are various grab modifiers here, which allows you to get a huge amount of tricks. What about Ragdoll? For the PS1 level, the physics in the game just disappeared. A year later, a re-release of the game - Maximum Remix.
‹
›
Home
View web version