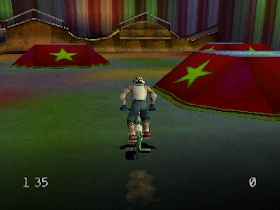 Genre: Sports
Perspective: 3rd-person
Gameplay: Tricks / Stunts
Vehicular: Bike / Bicycling
Published by: Acclaim Entertainment
Developed by: Z-Axis, Ltd.
Released: 2001
Platform: PlayStation (PSX, PS1)
Maximum Remix is an enhanced version of the Dave Mirra Freestyle BMX game. And both of them are simulators of extreme driving on BMX. The gameplay is made in the best traditions of THPS, interesting system for modifying tricks. So, you can not just make a flip, but do it without arms, legs, or without touching the bike at all! In the game arsenal added new tricks, levels and music (which of course is missing in the rip). Another point is that the game engine uses the physics of a rag doll to calculate the falls, which somewhat animates what is happening.
‹
›
Home
View web version