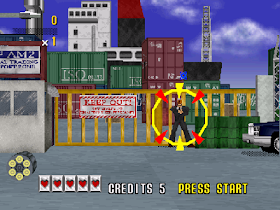 Genre: Action
Perspective: 1st-person
Gameplay: Arcade, Rail Shooter
Published by: SEGA of America
Developed by: AM R&D Dept. #2
Released: 1995
Platform: SEGA Saturn
Players act as police officers, and use a light gun to shoot criminals to advance the game. When a policeman shoots ordinary citizens, he is fined. The levels are scattered bonuses that provide heroes with a weapon or life. The weapon is lost if the player is hit, but not lost due to firing at ordinary people. The main difference between Virtua Cop and other shooters is the use of polygonal 3D graphics, which will later be used in The House of the Dead and Time Crisis. The game is also notable for the fact that it is one of the first games that allow the player to shoot through the glass.

In the process of investigating the illegal arms trade, the police entered the powerful criminal syndicate "E.V.L. Inc." The evidence gathered was enough to carry out a series of high-profile arrests, but the deployed agent was uncovered and he was killed. The bandits managed to destroy the main part of the collected evidence, but managed to transfer some of the information to their colleagues. Now police Michael Hardy and James Kul must destroy the criminal syndicate and arrest its leaders.
‹
›
Home
View web version