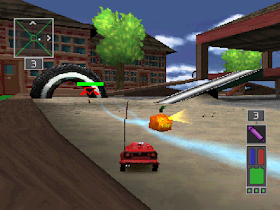 Genre: Racing / Driving
Perspective: Behind view
Gameplay: Arcade, Vehicle Simulator
Vehicular: Automobile
Setting: Post-Apocalyptic
Published by: Sony Computer Entertainment America
Developed by: Incog Inc. Entertainment
Released: 2001
Platform: PlayStation (PSX, PS1)
The plot of the game is a rethinking of the already familiar plot, but with an orientation to a younger audience. Now the “Metal Rattle” tournament is a battle on toy radio-controlled cars, and its participants are children. The founder of the tournament is the inveterate bully - Billy Callipso.

The gameplay of the game, as before, is a race for survival - several participants converge on the same arena. The player has a loss limit and a kill limit. The first is three units, which means that after three defeats the game will stop. The second shows how many enemies you need to destroy in order to win.
The arenas where the competition takes place are different: a playground, mini-golf, a meat factory, a room for laughter, a cinema and others. In many arenas there are traps: a circular saw moving out of the floor, a meat grinder, operating obstacles for mini-golf ... Also the levels themselves can be just as dangerous as the traps: for example, in the Treehouse arena you can fall off the narrow bridges between the platforms.
The process of the game itself is not particularly different from the other games in the series. From weapons: machine gun, rockets of all styles, napalm, firecrackers, firecrackers and “Spec. weapon ". There are also “Spec. receptions ", giving additional opportunities: shooting back, freezing, mine, jump and defense. There are various bonuses scattered around the level: green batteries (health), blue remote control (using environmental technology), red batteries (nitro booster).

The player’s secret characters, Trapper and Piecemeal, are significantly weaker than when played against them under AI control.