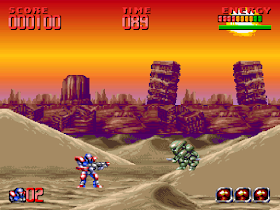 Genre: Action
Perspective: Behind view, Side view
Visual: 2D scrolling
Gameplay: Platform
Setting: Sci-Fi / Futuristic
Published by: Ocean of America
Developed by: Factor 5 GmbH
Released: 1995
Platform: Super Nintendo (SNES)
In this space epic, compared with the previous version, there was a magnificent and rich sound that allows you to fully immerse yourself in the game. Also in this part, you have more features that are perfectly displayed with the help of graphical effects available for this console. Especially colorful are the scenes of diving into the dark nooks of the ocean, the battle that takes place in the mouth of a huge worm, the race taking place on motorcycles in the air, as well as other moments. The appearance of the protagonist has changed just as slightly as the backgrounds on which the action takes place. They became darker and more saturated.
Also now you have access to some new types of weapons that were not in the game before. During the game, weapons can be improved and pumped, making it more powerful and accurate. You can also arrange an energy explosion that will hit a large number of enemies at once. To climb to an inaccessible height, you can use a harpoon, which will also help in the battle with terrible and menacing machines.
‹
›
Home
View web version