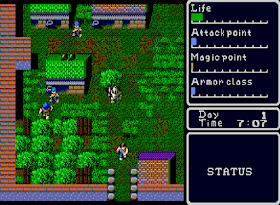 Genre: Action, Role-Playing (RPG)
Perspective: Top-down
Setting: Fantasy
Published by: Seismic Software Inc.
Developed by: T&E Soft
Released: 1990
Platform: SEGA Genesis / Mega Drive
The gameplay in Super Hydlide is very curious and entertaining. For its time, the game was a real discovery, because it touched on many aspects of the gameplay, which had not been covered in almost any game before. First, you are offered to choose a character class: warrior, thief, priest or monk. I think it is clear that the first two are focused on physics, and the second on lyrics, i.e. magic This, of course, will surprise no one, but this is only the beginning.
Each of them has a lot of parameters, one of the main ones is the maximum weight of portable equipment / items - how much your character can carry with them. Consider that even money has weight. Every coin has a little weight. Therefore, carrying bags of silver, copper and gold is very expensive. Here you will be saved by a bank in which you can keep your savings, and even at interest. If you do gain “extra weight,” then your hero will begin to move extremely slowly. And you have to either just throw out the unnecessary stuff, or sell. There is another option - to increase the speed of the game in the options, but at the same time, the in-game time will start to flow very quickly.
Yes, the second important parameter in Super Hydlide is precisely the time. The game has its own clock, as well as day and night. At night, all the shops, except for the hotel, are closed, and people wander home to their warm beds. Twice a day you need to eat properly, so it always makes sense to take provisions on the road. If you poison your hero with hunger, then HP will begin to decrease rapidly, and everything can end very badly. The same outcome will be if you do not sleep at night. Initially, the character from fatigue will be completely weakened and will not be able to cause damage to monsters, and then it will end up completely fatal. What, not a frail set of realistic innovations for the game of the 89th year? But that's not all.
The game has a karma system called Mind Force (MF). If you kill "good" monsters, then MF points will decrease dramatically. And if your hero completely goes to the side of evil, then almost all residents will stop talking to you. But only they can gather valuable information about where you need to go and what to do. In addition, a low MF single cave is impossible to pass at all, so keep in mind. But, fortunately, in order to restore your reputation, it is enough just to cut off the “bad” monsters for a while, and everything will be OK. It is very simple to distinguish a “good” monster from a “bad” one, the first ones do not attack you, and give more experience for them.
Control of the game is very simple. You can not only beat the monsters, but also dodge their attacks, by squatting. By the way, the latter is also used to interact with the world, for example, so you can open a chest or search a place.
Level Up in Super Hydlide also happens quite specifically. To raise your level, you need to accumulate a certain amount of experience points, and then go to the temple, where this sacred ritual will take place. In the same way, you can learn new spells, such as treatment (Cure), time manipulation (Time), and most importantly teleportation to the city (Move). By the way, with a warrior and a thief, not the whole set of spells is available, so if you plan to actively use magic, you should make a choice in favor of a priest or a monk.
In general, the game is not difficult, but it is provided that you properly understand the weight system. You can score points for Level Up fairly quickly, so there is no unnecessary pumping in the game, although sometimes you will have to “pump up”. The only thing that will be a little embarrassing is that any object dropped from the monsters will immediately get into your inventory and, most likely, will overload you. So you have to go into the menu and throw it out. But, the good thing is that there are not so many monsters in the game from which you can knock something out, so there is no pharming as such.
Labyrinths in Super Hydlide are not very confusing, except for the classic dark locations, where you will have to search for a wall in the pitch dark for a long time through which you can pass. At the end of the locations, the boss usually waits, who either flushes you with a few blows, or you wait for him - there is no other way. So go to him should be fully prepared, because neither the magic nor the inventory will not give you use.

In a nutshell, then - to save the world. Further inflorescences are called upon only to somehow dilute this unpretentious string. In the peaceful lands of Fairyland, a pillar of flame flared once. And then all the forests and plains filled with hordes of monsters. Finding out the reason for all these strange phenomena is your task.
Despite all the primitiveness, there are some interesting moments here. For example, space flight, the transition to another dimension and the disclosure of the secrets of an ancient civilization. And the ending of the game turned out to be more than original, and even with a secret meaning. So let there be no long dialogues and plot scenes, there is intrigue in the game.

This is the weakest point of the game. So much so that an untrained player, she will cause an attack of quiet horror. How did this NES-level graphics appear on Szego? In fact, the graphics are significantly improved compared to the original Hydlide 3. And besides, this is a game of the 89th year - then the NES was also in use! So all the claims to the schedule, I believe, are not relevant here.

If there are any complaints about the visual component of Super Hydlide, then there definitely cannot be any to music. She is great! The entire soundtrack consists of bright, memorable melodies. The cheerful theme of the city “Out of Freedom”, the battle march of the dark dungeons “Dragon!”, The beautiful ballad of the tower “The Skyscraper” and many other compositions, I am sure, will not leave anyone indifferent. Under this music, the game simply can not get bored, and therefore it takes place for a couple of evenings - because it is not so long.
‹
›
Home
View web version