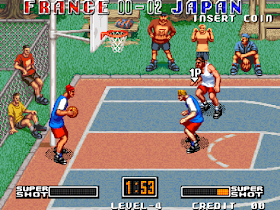 Genre: Sports
Perspective: Bird's-eye view
Visual: 2D scrolling
Sport: Basketball
Published by: SNK of America
Developed by: Data East Corporation
Released: 1994
Platform: Neo-Geo
This game is dedicated to basketball. Here you can choose from one of ten teams. Each belongs to a particular country. All teams play three people. All teams differ in their game techniques. For example, one may specialize in long-range shots, and the other in dunk. Scoring points is given exactly two minutes. This does not allow players to play hard. Along with this increases the complexity of the game. There are also no fouls here, so you can safely push the opponent in order to get hold of the ball. If the game ends in a draw, then you automatically become the loser. Each team has super throws, the line of which accumulates after successful throws. Competitions are held not on a uniform platform, but on different ones. Each stands out for its own design.
‹
›
Home
View web version