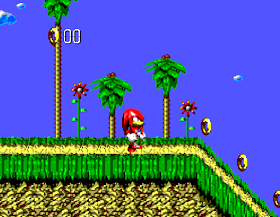 Genre: Action
Perspective: Side view
Visual: 2D scrolling
Gameplay: Platform
Published by: Tec Toy Indústria de Brinquedos S.A.
Developed by: Aspect Co.
Released: 1997
Platforms: SEGA Master System, SEGA Game Gear
The game is a sequel to Sonic Triple Trouble. A characteristic feature of Sonic Blast is pre-rendered graphics. Gameplay is similar to previous games in the series. The player is given the opportunity to play for two characters - Sonic the hedgehog and Knuckles the Echidna, possessing unique abilities and opposing the villain Dr. Robotnik. During the game you need to collect Chaos Emeralds, the presence of which opens up a good ending to the game.
Sonic Blast was developed for the Game Gear and Master System consoles, thus becoming one of the latest games for these gaming systems. The game received mixed reviews from critics. From the merits of Sonic Blast, reviewers called good graphics and gameplay, but the slow game speed and technical flaws made reviewers lower the project's rating.

Sonic Blast is a genre platformer made in pseudo-3D graphics. In the story of the game, Sonic the hedgehog and Knuckles the Echidna unite to collect the Chaos Emeralds and confront the villain Dr. Robotnik, who with the help of these stones wants to strengthen his base on the South Island.
Gameplay Sonic Blast is similar to previous games in the series. The player must pass five zones ("Green Hill", "Yellow Desert", "Red Volcano", "Blue Marine" and "Silver Castle"). Each zone is divided into three acts, and in the third player must defeat the boss. The player must collect rings, scattered around the level, and are points of life. As in the game Sonic Triple Trouble, when attacking the enemy, the character will lose only part of the rings, and not all at once, as in most other games of the series. If a player suffers damage from the opponent in the absence of rings, he will lose a life. The levels can contain monitors, when broken, they give the player additional rings and other features. To destroy opponents - various robots Dr. Robotnik, a character must jump on him, curled up in a ball. Passage of each act is limited to ten minutes; depending on the time spent at the end of the act, the player is awarded bonus points. In the event of the death of the character, the game begins anew, or from a control point. Having reached the end of the level, the player must mark their completion by touching the tablet with the image of the Robotnik.
The player can choose from two characters: Sonic the Hedgehog and Knuckles the Echidna. Sonic's abilities and techniques are similar to those used in previous games, but he also had the opportunity to make a double jump, which allows him to reach great heights. Knacks, as in the game Sonic & Knuckles, is able to climb the walls and make a planning flight, thanks to which he can fly over short distances, gradually losing height.
In the second act of each zone there are portals in the form of a ring, leading to special stages. At these stages, the player must collect Chaos Emeralds. If a player collects all of them, then the final battle with the boss will open, after passing which the player will see a good ending to the game. Special stages are similar to those presented in the games Sonic the Hedgehog 2 and Sonic 3D. The player must collect rings and dodge obstacles along the way. When passing the level with 50 rings, the player receives the Chaos Emerald.
‹
›
Home
View web version