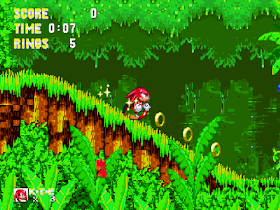 Genre: Action
Perspective: 3rd-person, Side view
Visual: 2D scrolling
Gameplay: Platform
Art: Anime / Manga
Published by: SEGA Corporation
Developed by: Sonic Team
Released: 1994
Platform: SEGA Genesis / Mega Drive
Sonic the Hedgehog 3 & Knuckles is a great game that combines Sonic the Hedgehog 3 and Sonic & Knuckles. It includes all 14 levels from both games that the player passes through as well as all three variations of the "Bonus Stage" level. To complete the game are available to choose from all three main characters - Sonic, Tales and Nackles. Thus, it is possible to play at the levels of Sonic 3 for Nuckles, and for Tails - to pass the levels of Sonic & Knuckles (both alone and in a team with Sonic). All levels are initially designed so that, because of their abilities, the characters pass them in different ways. However, from Sonic 3, the game took over the system of saving and the mode of competition.
Combining Sonic the Hedgehog 3 and Sonic & Knuckles makes a significant innovation in the gameplay: Super Emeralds. Starting from six Sonic 3 levels, the player can initially collect seven ordinary Chaos Emeralds - during the "Special Stage" stages, corresponding to the third part. If he collected them all, then starting from the level of "Mushroom Hill" (the first level of Sonic & Knuckles), his character gets access to the "Hidden Palace" zone, where he gives the collected stones to the Main Chaos Emerald. The game character loses its super-form, but by the end of the game it gets the opportunity to collect seven Super Emeralds. With their help, the character can take a hyper-form, which gives even greater speed and height of the jump than the super-form, as well as new abilities: Hyper Sonic rushes through the game screen with an enhanced attack in the jump, destroying all visible enemies, and same result when clinging to a wall. The character Tails in Sonic 3 & Knuckles when collecting all fourteen Emeralds becomes available super form that he could not have in Sonic the Hedgehog 3. Just like the hyper form in Sonic and Knuckles, Tails super form gives him a new feature: around him four gold birds fly (Super Flick), which themselves destroy the enemies approaching the character.
‹
›
Home
View web version