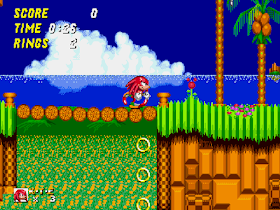 Genre: Action
Perspective: Side view
Visual: 2D scrolling
Gameplay: Platform
Art: Anime / Manga
Published by: SEGA Corporation
Developed by: Sonic Team
Released: 1994
Platform: SEGA Genesis / Mega Drive
Knuckles the Echidna in Sonic 2 is a game that is obtained by connecting the Sonic & Knuckles and Sonic the Hedgehog 2 cartridges. The game allows you to fully pass Sonic the Hedgehog 2 for Knuckles as a game character. The gameplay remains almost the same, with the exception of small changes: some places appear on the game levels that only Knacks can get into - thanks to their ability to climb walls; In addition, for Knuckles, the player can more often attend the "Special Stage" levels, since after leaving the character the character keeps the collected rings with him, unlike the original Sonic the Hedgehog 2. The ability to play as Sonic and Tails, as well as additional options are missing.
‹
›
Home
View web version