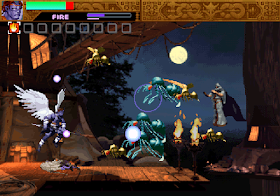 Genre: Action
Perspective: Side view
Visual: 2D scrolling
Gameplay: Arcade, Shooter
Setting: Fantasy
Published by: XS Games
Developed by: Psikyo
Released: 2002
Platform: PlayStation (PSX, PS1)
Unlike most of the representatives of the genre, mainly concentrated in the space age and various wars with the use of aircraft, in Sol Divide we plunged into a fantasy world filled with griffins, dragons, sorcerers, and knights chained into steel armor. All of them, naturally, yearned for the blood of our hero. Rather, one of the three available to choose from: the mighty warrior Kashon, the adorable sorceress Tyora and the knight mage Vorg. The latter was the golden mean between the extremes in the face of Kashon and Tyora.
All the characters in the game have the opportunity to attack opponents at a distance or close, for this they used different control buttons. We could also switch between spells. An interesting element of this jokemap was the presence of combat combinations, the knowledge and timely use of which made life much easier for the player. Especially against the background of the fact that most of the opponents in the game were real sponges for bullets, and they experienced real pain and suffering only when they came in contact with melee weapons.
The console version of the game was not the first, it was a ported arcade version with several changes. First, there was a disgusting and meaningless introductory video, which is better to skip, otherwise then you will not get rid of nightmares. Secondly, a scoring system and multipliers depending on combinations were added to the game. Thirdly, and most importantly, for the console version created the original mode, and nicknamed.
The "Original" mode was different from the usual arcade in that it was a side-scrolling. Even now this phenomenon is not very frequent. RPG-elements of the game began to shine in it: we could choose equipment, get experience for killing enemies, level up and improve the basic characteristic - the maximum amount of health. Death in this mode erased the entire progress of the passage, but the resulting level was maintained, and the characteristics of the hero were cut off twice. Objects, of course, were lost. To be honest, the 17-level "Original" dungeon is the mode that made me once go through Sol Divide, and managed to deliver a lot of fun. Unlike the boring arcade.
‹
›
Home
View web version