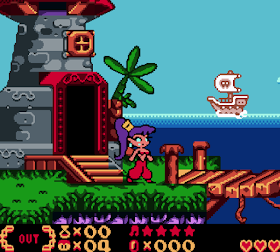 Genre: Action
Perspective: Side view
Gameplay: Platform
Published by: Capcom Entertainment
Developed by: WayForward Technologies
Released: 2002
Platform: Game Boy Color (GBC)
The game is the first in the Shantae series. Later, two sequels were created for her: Shantae: Risky's Revenge, which was released in 2010, and Shantae and the Pirate's Curse, released in 2014. The fourth game, Shantae: Half-Genie Hero was released on December 20, 2016.
The game tells about the adventures of the half-genie girl Shantae, who travels around the Sequin Land to thwart plans to take over the world by the evil pirate Risky Boots. During his travels, Shante learns various dances and collects items that make her stronger. She also gains new abilities and opens up new places in the game world to finally fight Risks in her shelter.
The game was little known due to the fact that it was released a year after the release of the next portable console from Nintendo, Game Boy Advance. However, since the release, she received positive feedback from the gaming press and earned recognition. Shantae has been included in the many lists of the best Game Boy Color games and is even called a "classic cult game" by some reviewers. The game was reissued in the Nintendo 3DS Virtual Console service on July 18, 2013.

Shantae is a platform game in which the player controls the eponymous heroine semi-genie Shantae, who travels around the land in an attempt to stop the evil pirate Risks Boots. For attacks, Shante uses his hair as a whip. In addition, Shante can spend precious stones that fall out of defeated enemies on various objects, such as healing potions and damaging objects, as well as learn new combat techniques. The game world consists of five cities and localities between them filled with obstacles and enemies. To advance in his journey, Shante needs to look for various characters who open dungeons in each of which there is a genie-guard who teaches Shante new dance moves. While dancing, Shante can transform into different animals: a monkey that can climb walls, an elephant that can crush cobblestones, a spider with the ability to move along the nets of a web in the background and a harpy that can fly. Using these abilities, Shante can climb into new areas and find hidden objects.
The game has a cycle of change of time of day, because of which enemies become stronger at night. At night, the player can collect hidden fireflies, for collecting all of them accrued reward. Other collected creatures are teleportation squids (English Warp Squids), which are items in the form of cephalopods hidden in the dungeons, exchanging which the squid in each of the cities the player gets the opportunity to instantly teleport to the corresponding city. In addition, Shante can find heart-shaped vessels that increase her maximum health. There are also various mini-games in the platformer, such as dances and casinos for additional gems.
‹
›
Home
View web version