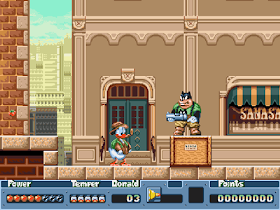 Genre: Action
Perspective: Side view
Visual: 2D scrolling
Gameplay: Platform
Published by: SEGA of America
Developed by: SEGA Enterprises Ltd.
Released: 1991
Platform: SEGA Genesis / Mega Drive
The player will play for the main character - Donald. He can jump, run and shoot (and the list of weapons is quite diverse; see below). Also, the main character can slide on the surface on the stomach, which helps to penetrate the caches and just go through the stages.
Passage of the stage begins with his choice on the map (initially only three stages are available - “Duckburg”, “Mexico” and “Transylvania”, but, with the passing of the game, new ones open). Then Donald is landed on him from an airplane, and the player begins the passage of the stage. At the end of the first part of the stage (each stage is divided into several parts, but it is not always possible to go straight through it completely) a flag is put in the form of a flag. If you stand next to him and select the “Call the airplane” menu item in your inventory, the airplane with Donald’s nephews will fly back for him and pick him up from the stage where Donald is now, returning to the map.
During the game, the player will find various items that will help in the passage of a particular stage. To read the description of the selected item, you need to select the menu item "Look" in the inventory; To use the selected item, you need to select the "Use" menu item.
At the beginning of the game, 3 life and 5 life force units are given, which can be restored up to 8 units while finding the necessary items (see below). With the loss of all lives, it is possible to continue the game 3 times, without starting the passage again.

In total, the game has 9 stages, each of which is divided into several large or small parts.

Streets and roofs of the city. At the first passage of the streets, Donald will meet with the policeman, who will say that the Red Vantuz is required to continue passing the stage in order to climb the walls onto the rooftops. You can get them from Goofy in Mexico - inside the pyramid. At the end of the stage, Donald is waiting for a “roller coaster” and a meeting with Vint, who is giving a new type of weapon - “Chewing gum”, which will allow him to enter Dracula’s castle in Transylvania.

Desert and the pyramid of Mexican Indians. In the desert, Donald will have to go through the quicksand and hordes of living cacti, which "break up" into pieces and grow back when you approach them. At the first passage of the desert, Donald will meet with the guard of the entrance to the pyramid, who (or who) will tell you that a key is needed to enter the pyramid. You can get the key from the policeman in Duckburg (if you return after talking with the guard). At the end of the pyramid will meet with Goofy, who gives the "Red Vantuz" and the scroll that will be needed in the Egyptian pyramid to solve the riddle.

The castle of Count Dracula and its surroundings. The longest stage of all. Here Donald will meet with ghosts (the only immortal enemies in the game), the skeletons, as well as Count Dracula himself as the boss and his assistants - the bats. The castle has one water location and many traps. After defeating Dracula, Donald gets another piece of the map and opens up new places.

Deck and ship hold. On the deck of Donald will meet the Vikings, sitting in barrels and crawling out for a while in order to launch an arrow (barrels can be broken using the "Chewing gum"). At the end of the passage of the deck, Donald will meet with the captain of the ship, who is very frightened by the ghost locked in the hold. To get there, you need the key of the hold, which is hidden in a cube of ice at the South Pole. For getting rid of the ghost, the captain will give "Green Suckers."

Eternal ice and snow, as well as their inhabitants: penguins, killer whales and walruses. In the first part of this stage, Donald will have to get the key from the hold of the Viking ship, which is hidden in an ice cube. To melt it, you will need the scepter of Ra, which is located in the pyramid in Egypt. For the passage of the stage will also require a "green plunger". At the end of the stage, Donald finds a diary that tells the location of the treasure, but the diary, when returning to the airplane landing site, has to be given to the main antagonist of the game, Black Pete, in exchange for the nephews he captured. After that, the mark of Black Pete's refuge appears on the map (although it is not clear how Donald flies away from the South Pole, as Pete, along with his diary, takes the airplane).

Egyptian desert and the pyramid. Inside the pyramid of Donald, various traps, fiery chasms and a descending ceiling are waiting (to understand how to stop it, you need to look at the scroll that gave Goofy in Mexico). Passage of the stage is very similar to the action of films, where the main character is Indiana Jones.

Indian city and palace of the Maharajah with a labyrinth of rooms and corridors. The shortest stage of all, if you know how to get through the maze. To get the key to the pyramid in Egypt from the Maharajah, Donald will have to curb the tiger, who broke free and sits in one of the rooms of the palace.

Ownership of Pete, where Donald will have to go through the jungle and the production workshop, to regain the Viking diary, defeating Pete along with his assistants. The stage does not contain secret places and is completely straightforward.

The island with the desired treasure. After receiving the diary, a new label will appear on the map, where Donald will immediately go. Here you have to go through several difficult locations - the jungle and the huge temple; to defeat the treasure guard before you get what this whole game was about.

The list is small, but all types of weapons are very unusual.
Plunger - has infinite ammo; There are several types of these weapons, obtained during the game from different characters:
Popcorn - limited stock.
Kills the enemy on the spot, adding to you a little more points than after the defeat of the enemy with “Suckers”. When fired, a projectile in the form of corn instantly flies in several directions, which makes it easy to cope not only with standing opponents, but also with flying ones. Also kills bosses much quicker than Suckers. When a shot is spent 5 units of ammunition; the largest ammunition - 60 (each unit of the found "Popcorn" gives 10 units).
Bubble gum - limited stock.
Weapons in the form of large bubbles, which helps to get rid of barriers in the form of barrels, stone slabs, ice blocks and ordinary enemies: just like Popcorn, it kills enemies instantly, and bosses - much faster than Suckers, but shells This weapon is incredibly slow. When a shot is spent 1 unit of ammunition; the largest ammunition - 50.
Chile peper - it is possible to use only a few times during the game.
The best weapon in the game, however, it is extremely rare (3 times for the entire game - in the first parts of the stages “Dakburg”, “Maharaj” and “Egypt”). To use it, you need to collect five pods of hot pepper - after that, Donald becomes invulnerable for a short period of time, accelerates and kills all enemies when confronted with them.

This section is excessive or contains minor details.
If you do not agree with this, please indicate in the text the materiality of the stated material. Otherwise, the partition may be deleted. Details can be on the talk page.
When passing the game, the player will find the following items. Ammunition for "Popcorn", as well as all other items, except the keys, can be found after the destruction of the enemy, who has a backpack with him (which is displayed on him externally). Also, there are secret rooms containing items, and sometimes reducing the time of the stage.
‹
›
Home
View web version