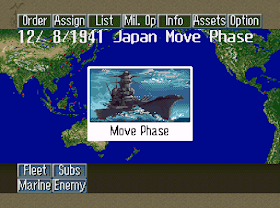 Genre: Simulation, Strategy / Tactics
Perspective: Top-down
Vehicular: Naval / Watercraft
Setting: Historical Events
Published by: KOEI Corporation
Developed by: KOEI Co.
Released: 1995
Platform: Super Nintendo (SNES)
PTO 2, as the name suggests, was already the second part of the game from the Japanese KOEI. In essence, a global strategy on the confrontation of the United States and Japan in the Pacific. The more versed in the game, the more amazed its depth and scope.
At the beginning of the game, you can choose a playable side - the states or the country of the rising sun. Then you need to distribute the annual budget for the production of ships and artillery, espionage, steel production and other important wartime concerns. Then, using a special menu to roll a fairly large set of characteristics for each of several wards - fleet commanders. Then came the military council in the headquarters, where the current combat objectives of the operation were determined. And finally, the strategic part of the game began. On the extensive map dozens of red and green dots - sea bases, which were to be captured or defended. Each base has its own control screen, on which information about the ships there, aircraft (if there is an airfield), supplies, coastal artillery.
Tactical combat in the sea and on the coast took place on a map broken by rectangles. However, a tactical battle could be turned off at the beginning of the game and costs only with the screen of the results calculated by the AI after the battle.
The game was long, but worth it. Battle battleships with aircraft carriers in the fleets, converged in bloody battles in the vast expanses of the Pacific Ocean. Squadrons of sea fighters fought for air superiority. Bases passed from hand to hand, but resources were almost always lacking. Although the AI did not shine with a leadership talent, it was still very interesting to play. In general, a full-fledged strategy on the then not yet hackneyed topic about the Second World War.
‹
›
Home
View web version