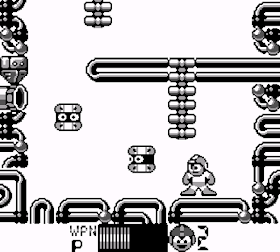 Genre: Action
Perspective: Side view
Visual: 2D scrolling
Gameplay: Platform
Setting: Sci-Fi / Futuristic
Published by: Capcom U.S.A.
Developed by: Japan System House Co.
Released: 1992
Platforms: Game Boy, Nintendo (NES)
After passing through the first four bosses (Clash Man, Metal Man, Wood Man and Air Man), a small intro is shown to the player, in which the Mega Man can be seen in front of the castle. Then Mega Man teleports to the castle and meets with Dr. Wiley, the latter overthrows the Mega Man down, where there are four teleports. Going into the teleport Mega Man is waiting for a full level, and at the end the boss.
After the destruction of the next four bosses, Mega Man will have to fight with Quint, another boss. After the destruction of this boss, the player will have to complete a level, at the end of which he will meet with the final boss, Dr. Wiley. After defeating Dr. Wiley, a cutscene is shown to the player - Dr. Wiley flies away from his castle on the run, but Mega Man is pursuing him on Rush. Then Mega Man launches a Wiley rocket into the aircraft, in connection with which Wiley falls to the ground from space, and his device explodes. However, this time the insidious doctor manages to escape. After the final cutscene are captions.

After the destruction of the robot Quint, the player gets Sakugarne at his disposal, which can be used as a platform for jumping, as well as a weapon. After destroying Clash Man, Mega Man gets Rush Coil, allowing him to jump to high places. Rush Jet Mega Man gets after winning the Air Man, the item allows the Rush to turn into a flat surface and move the Mega Man through the air. In order to get Rush Marine, the player must destroy Metal Man. The item allows Rush to turn into a submarine and swim without going to the bottom in any direction.
‹
›
Home
View web version