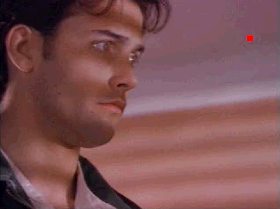 Before swap CD, save state to file, next CD, upload save state file.
Genre: Action, Adventure
Perspective: 1st-person, 3rd-person
Art: Full Motion Video (FMV)
Published by: Capcom Entertainment
Developed by: 3Vision Games, Evolutionary Publishing
Released: 1996
Platform: PlayStation (PSX, PS1)
Interactive movie is not popular genre in video games: rarely anyone manages to combine a movie with a good action game. "The marriage of Hollywood and Silicon Valley", as a rule, leads to inadequate results: the film image suffers from a reduced resolution, and the control system tires, but does not provide sufficient controllability. Yet Sarso makes another attempt to save the reputation of the genre of FMV. Fox Hunt is 3 hours and 20 minutes of a feature film comprising 735 scenes. The game was filmed in Los Angeles and Aspen (Colorado) for 33 days.
You play the role of Jack Fremont - a nice guy who was assigned by the CIA to stop the activities of the former KGB colonel named Fox, who is going to destroy Los Angeles with a Soviet missile from an old nuclear arsenal. The Fox was sent to the United States in the early 1970s so that it penetrated the media and had a bad effect on the moral level of Americans, spoiling their television; and he managed to do a lot of cheap TV shows for this purpose. But apparently, it did not help ...
The movie-game involves double agents, hired killers, the Russian mafia, as well as a beautiful CIA agent named Lisa, for whom Jack is not averse to plodar. You have to dodge bullets, go skiing, jump on a ski with a parachute, as well as engage in melee combat. You must choose your options for collecting information and evidence, making decisions in real time. The game can go twenty different trajectories and end with ten different outcomes - this is a record for interactive movie!

Be sure to find the video book and keys hidden in the chair. As soon as your timer "emanates the spirit" (that is, it counts down the last second), Fat Freddy will appear on the scene. It is not at all necessary to kill him immediately, but it is necessary to remember through which window he escaped.

Find TASO - a spy weapon and a CIA agent card. Trying to use a computer, if you mess around for a long time, it will end badly.

Take the knife and the bullet on the table. You can meet Freddie Fatdy again. When Frank enters the room, exit through the same window as Freddie.

Do not sit right in the waiting car. Examine nearby leisure travel advertising, remember the number of grass huts on it, then turn around and go to the six-hour express delivery room.

Depending on your previous actions, Jack may go to Las Vegas or Aspen.

With the first two show-gerl can be done with a simple block. The third one should be punched with a fist, and then added only with the legs. With the latter also figure out a simple block. Attack or block them if they start to move, or their faces change. Before leaving Las Vegas, you should visit another six-hour express delivery point.

Proceed to the sign "ski hut", which corresponds to the number of "grass huts", which you counted on the poster at the hospital. Pass through the ski gates to the left / right and skip no more than two resort visitors. And if you want to get a gold medal, immediately find another express delivery.
Note: in Strategy Mode, Jack will always receive a gold medal. However, you still need to visit the express
shipping

In this part, after talking with Chauncy, time decides everything. Find a blue feather (maybe anywhere), a bullet (in a bra) and a knife (in a red book underwear). If you fail too long, exit through the curtains and up the stairs to save time. After climbing on the stairs, take playing chip and proceed to the shelf for playing chips. Move the chips to find the "powder". Move the powder to find the key that “tells” at which card table you should play (a little later).

Watch the video clip clip and watch the man’s actions. A CIA guy will give you instructions for the first two surrenders. In the third - already play yourself. If Wolf performs the same moves as the man in the video book, draw a card. Otherwise, stop, that's enough. After winning three submissions, go to Disk 3.
Note: While you have the knife, you “go” to Disk 3 automatically. But do not win in three passes - you will not of money.

Fight in the final stages

You must fight both Alans, several Russian fighters, a caveman and Frank. When you fight cool Alans: if they attack, block the blows; if you are stupidly standing in a boxing pose - cut in with your fist, or better yet with your foot. You can win the rest of the bout with round house kick and leg sweeps.
‹
›
Home
View web version