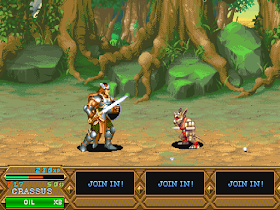 Genre: Action
Perspective: Side view
Visual: 2D scrolling
Gameplay: Arcade, Beat 'em up
Setting: Fantasy
Interface: Direct Control
Published by: Capcom Co.
Developed by: Capcom Co.
Released: 1993
Platform: Arcade Machine
What can be said about this game, only that it is unusual. The unusual thing is that here is presented side-scrolling beat’em up, seasoned with RPG elements. It certainly looks amazing, I have never seen anything like this before. More specifically, there is a selection of items collected from each level, dialogue with passers-by, followed by a choice of a path. As for the beat’em up component, nothing is lost here, everything is as it should be: strikes, grabs, various weapons. Summing up, we can say that it turned out to be a rather interesting project with an exciting storyline, which can be played more than once and each time in a different way.
‹
›
Home
View web version