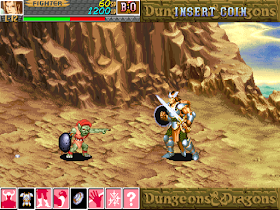 Genre: Action
Perspective: Side view
Visual: 2D scrolling
Gameplay: Arcade, Beat 'em up
Setting: Fantasy
Published by: Capcom Co.
Developed by: Capcom Co.
Released: 1996
Platform: Arcade Machine
Continuation of a peculiar side-scrolling beat’em up. The only thing that has changed is that the game has shifted more towards beat’em up, which upset me a little. The game of course turned out to be spectacular, and the uniqueness of a little lost. Everything is also present RPG system, now added to the change of objects on the fly, i.e. one added button is called the subject table and the choice is made, and the dialogues have not gone away. The Beat’em up component, as I said earlier, has increased significantly: movements have become sharper, battles have become more ambitious, battles with bosses have become more interesting, i.e. everything is up to par. Characters also became more by as many as 2 people: a magician and a thief. The design of the game has become much brighter and more beautiful.
‹
›
Home
View web version