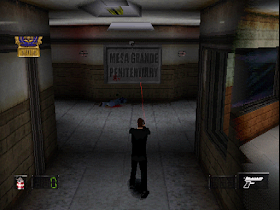 Genre: Action
Perspective: 1st-person, Behind view
Gameplay: Shooter
Published by: Fox Interactive
Developed by: n-Space
Released: 2000
Platform: PlayStation (PSX, PS1)
As for the previous opus, the game is divided into three types: shooting in sight in the third person, shot by optical pistol, and racing game. However, unlike Die Hard Trilogy, which was inspired by the script of the first three Die Hard films, Die Hard Trilogy 2 has only one scenario separated by three distinct genres of games. The game follows the adventures of John McClane attempting to thwart the plans of terrorists through the scenery of Las Vegas and the Nevada desert.
John McClane lives in his New York apartment before he gets a phone call from Kenny Sinclair, his best friend and colleague in the New York City Police Department visiting Las Vegas. Kenny is transferred to the Mesa Grande Prison and a party is launched in his honor. McClane accepts the invitation. At this party, McClane begins a brief conversation about a certain inmate named Klaus Von Haug, and meets Reese Hoffman, director of Roaring 20's Casino, and his secretary Elena Goshkin. However, during the party, Von Haug managed to escape from his cell releasing other inmates of the prison on his way; as such, it is McClane's duty to annihilate these bloodthirsty terrorists.
McClane control to kill every terrorist, flies off again to the party, and before innocent people are wounded, finishes the last of these criminals. He hears from a party member that terrorists are holding hostages on a bus somewhere. As the game progresses, it is revealed that Kenny, Reese, and Elena are involved in these terrorist cases to control Las Vegas. McClane dispatches them all, but Kenny remains unharmed.
‹
›
Home
View web version