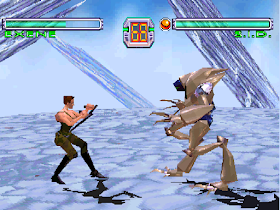 Genre: Action
Perspective: Side view
Gameplay: Fighting
Setting: Sci-Fi / Futuristic
Published by: Vic Tokai
Developed by: Kronos Digital Entertainment
Released: 1995
Platform: PlayStation (PSX, PS1)
Criticom: Critical Combat belongs to the same genre of temperamental games - fights in which Virtua Fighter and Battle Arena Toshinden once shone, although, perhaps, this game suffers from some slowdown in action. However, fans of this genre should get great pleasure. Here are interesting characters (six out of eight are women) who can perform brilliant techniques. Many of these techniques are designed for use against a fallen enemy. If the opponent flies out of the ring - you won. But mastering complex techniques immediately fails; Your arsenal increases as your rank increases. You can increase it only twice; each time for this you need to go through the whole game and earn your own mirror reflection! And you will need special techniques, - with each fight the struggle becomes harder. The graphics of the game also remind of Battle Arena Toshinden: polygonal figures of fighters, a magnificent bright background. True, character animation when performing certain techniques (especially shots) is somewhat careless.