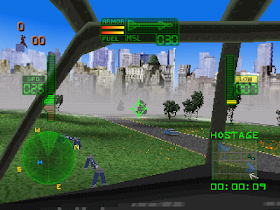 Genre: Action
Perspective: 1st-person, Behind view
Vehicular: Helicopter
Published by: Virgin Interactive Entertainment
Developed by: Black Ops Entertainment
Released: 1996
Platform: PlayStation (PSX, PS1)
... On the horizon, two brilliant black helicopters appear, armed with the most modern means of destruction. Before them is a city captured by enemies. Only small centers of resistance remained in the city; besides, there are people left there who you have to save. But in order to do this, you must enter the zone of visibility of your enemies and take the hostages literally from under their noses. Your comrades, of course, will support you with fire, but you cannot afford to keep too strong a cover. You yourself must fight the MIGs who are trying to knock you down or drive you out. And all this you have to do in one day while you are in service at the Black Operations connection ...
Black Dawn is a kind of continuation of the Agile Warrior F-111X game, previously released by the same company, only now you are driving not a jet plane, but a helicopter. Thus, you will be able to descend to the ground and conduct combat ground actions. On some levels you will also have to land troops on the ground, and then pick it up.
The game features various angles of observation, so you can perfectly see all the surroundings and the approaching enemy. The cockpit overview is plausible enough even for an arcade game, you can see all the instruments, weapon controls, flashing lights. At your disposal are many types of weapons, including a cannon and a machine gun with automatic targeting systems.
As soon as you appear in the territory accessible to the enemy, a whole heap of trouble will fall on you. You are attacked by airplanes, tanks, guns, a variety of other ground vehicles - armored personnel carriers, military jeeps and more. You need to complete, no more, no less, 28 tasks, and I must say, this is not an easy task! Moreover, the people who are distraught with fear, whom you must save, do not pay attention to you, but simply run away in panic.
The game is perfectly made technically. So, even if you do not immediately achieve success in the implementation of basic tasks, you will have time to get a lot of pleasure.