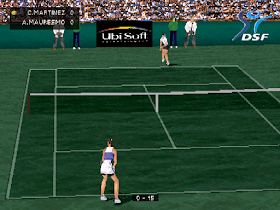 Genre: Sports
Perspective: Behind view, Bird's-eye view
Sport: Tennis
Published by: Ubi Soft Entertainment Software
Developed by: Aqua Pacific Ltd.
Released: 2000
Platform: PlayStation (PSX, PS1)
The continuation of the line of the tennis simulation from the French company UbiSoft. As before, you have access to the Exhibition, Season and Tournament game modes. The latter is presented in ten different variations on eight courts around the world. The game has seven real athletes who are very similar to real players. You can play in single, doubles or mixed discharge, also available the ability to self-set the number of sets. In comparison with version 99, there are no obvious improvements in graphics, but they are generally not needed, because graphically the game looked excellent before.
‹
›
Home
View web version