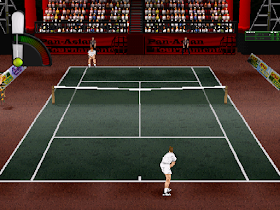 Genre: Sports
Perspective: Bird's-eye view
Sport: Tennis
Published by: Gremlin Interactive Limited
Developed by: Gremlin Interactive Limited
Released: 2000
Platform: PlayStation (PSX, PS1)
The game uses the most recent (at that time) developments in the Motion Capture, which made it possible to accurately reproduce the movements of athletes on the tennis court. The action of each match takes place on a fully 3D court. Replay mode will allow you to play again and again the episodes of the competition you are interested in and accurately determine where certain mistakes were made. The game uses a new engine companies Gremlin, Actua Sports 3D Engine which provides high speed graphics and the overall dynamism of the gameplay. Before the start of the game, “rummage” in a huge number of options. There are several game modes - Professional and Amateur Toumaments. But do not think that on the court you will see only athletes. There are judges, line judges, ministers bringing balls. All of them are carefully drawn using the technology of Motion Capture. The developers are not without pride that you will not see such realistic bare legs in any video game, except, perhaps, Tomb Rider. Comment on the events taking place on the tennis court will be well-known observers of Sue Barker and already familiar to you from the Gremlin football simulator series - Barry Davies.
‹
›
Home
View web version