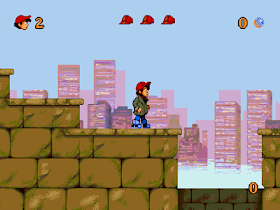 Genre: Action
Perspective: Behind view, Side view
Visual: 2D scrolling
Gameplay: Platform
Published by: Hi-Tech Expressions
Developed by: Funcom Productions A/S
Released: 1994
Platform: SEGA Genesis / Mega Drive
The game is based on the same American animated film We're Back! A Dinosaur's Story. A animated film about the adventures of dinosaurs in a big city and how two kids help them. At the beginning of the game, you must choose between two characters, a boy and a girl: Lovie and Cecilia. Each character has its own set of levels, some of which are the same for both characters. Game currency are soap bubbles. They can buy various auxiliary items: an extra try, a blue shoe for high jumps, a red shoe for fast walking, life (1 UP), a big soap bubble (shield) and a boomerang, which can be used as a weapon. Some of these items can also be found on levels. The set of levels is diverse and will not make you bored.
‹
›
Home
View web version