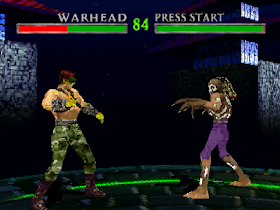 Genre: Action
Perspective: 3rd-person
Gameplay: Arcade, Fighting
Published by: Midway Home Entertainment
Developed by: Midway Manufacturing Company
Released: 1997
Platform: PlayStation (PSX, PS1)
The game was perceived by the public in different ways: someone condemned it for its similarity with the MK3, someone, on the contrary, praised the excellent graphic component. To tell you the truth, the comparison with the Mortal Kombat series is not random, and you will understand why just below.
Let's start, as expected, with the plot. It is not easy to write a script for a fighting game, but, nevertheless, the developers have deigned to jot down a few lines to get us up to date.
Many years ago, the spacecraft of an ancient civilization carried Rude. This was the name of a powerful artifact - a stone with unlimited power. However, the ship was wrecked in the atmosphere, as a result of which fragments of Ore fell on our planet. All ten fragments, one way or another, were found by different people. Touching a stone, a man received the power of God. The stone also changed their appearance - like gods, corresponding to their inner essence. Now, led by various motives, the ancient gods are eager to get the nine remaining fragments, for only a fully assembled artifact gives unlimited power and power.
‹
›
Home
View web version