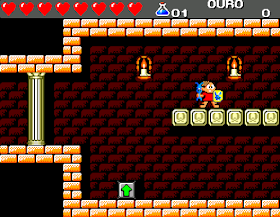 The success of "Monica in the Castle of the Dragon" was extraordinary, but unfortunately the fans missed one thing: the participation of the rest of the group! So for the sequence Tectoy had as objective to put more characters inside the game, this time using as base the game "Wonder Boy III: The Dragon's Trap" (of 1989), where Monica is kidnapped by Captain Ugly after defeating the Dragon in the game and now his friends alternate in the quest to rescue her.
The game is relatively long, more than two hours for those who already have the genre (and greater time for beginners), although not very difficult, presents challenges in the right measure, with extensive scenarios and mazes to be explored (there are several hidden items!). The graphics and the overall look of the original game are very beautiful and match perfectly with the Mônica Class, and closing the package we have a very exciting soundtrack that leaves the experience even more exciting.
"Turma da Mônica em: O Resgate" is a game that marked many Brazilians in the 90s, presenting a super adventure with the most beloved group of national comics. Mixing elements of action, platform and RPG and is remembered until today with great affection. Join the little heroes and together rescue Monica from the clutches of the evil Captain Ugly!
‹
›
Home
View web version