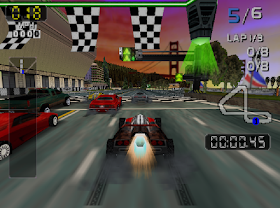 The game has different modes with different gameplay. In total there are 13 models of cars, but some of them are initially hidden. You can open them by collecting special coins. Cars have parameters: speed, acceleration, handling and durability. Before the race, you can adjust the parts (transmission, wheels, engine) and the look (color, shine, wheels). Cars have retractable wings that help leveled in a high jump or when falling.
Trails often have hidden shortcuts, jumps and hiding places with bonuses. In multiplayer mode, the screen is divided into equal parts for each player.
For more information, a tachometer is available (how many wheel turns were made per race), a speedometer, an odometer (how much distance was covered for the race), a radar, transmission, a route map and hour counters. In some modes, conditions such as wind, fog and gravity on the track are adjusted.