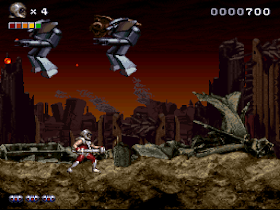 Genre: Action
Perspective: Side view
Gameplay: Arcade, Shooter
Setting: Sci-Fi / Futuristic
Published by: Virgin Interactive Entertainment
Developed by: Rainbow Arts Software GmbH
Released: 1995
Platform: Super Nintendo (SNES)
Cool futuristic shooter from the creator of the magnificent Turrican series. We play for the special forces, which protects the Earth and the few earthlings left after the crushing invasion of aliens. The graphics and sound are very good. Gameplay will please all fans of shooting. The hero collects various weapons, and after two levels he will alter himself on a starship. Next, the game will alternate between two modes: a flight on a fighter and attacks of the character on enemy territory. Separately, I want to highlight the bosses, which are impressive in their study, and sometimes in size. In 2015, there was an English version called Targa.

The Earth is invaded by a devastating alien race, and only a super-soldier can eliminate hostile forces and save humanity. An arsenal of devastating weapons is available to the player to complete the mission.