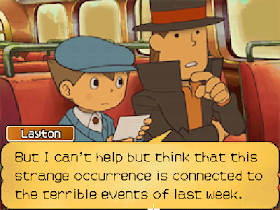 Genre: Puzzle
Perspective: 1st-person
Narrative: Detective / Mystery
Published by: Nintendo of America Inc
Developed by: Level-5 Inc
Released: 2008
Platform: Nintendo DS (NDS)
As in Professor Layton's previous games, Unwound Future is an adventure game in which the player solves puzzles offered by local citizens to progress through storytelling in animated scenes. The player moves in the game between still images of locations. The player can use the tactile screen of the DS to interact with non-playable characters, initiating a dialogue or getting a puzzle, and can also search anywhere in the background for Hint Coins, with some areas needing to be touched several times to reveal a secret hint coin or a puzzle. Puzzles are jigsaw puzzles of many varieties, including visual, math and logic. There is no time limit to solve puzzles, and the player can get up to 3 tips at a cost of one token each. A new feature in Unwound Future is the Super Hint, which costs 2 coins, and can only be bought after the other 3 tips have been revealed, but that almost reveals the solution to the puzzle. If the player is correct in solving the puzzle, they win a series of "Picarats", a form of currency within the game. Guessing the answer incorrectly will reduce the number of picarats the player can get in subsequent attempts. Players can visit certain areas in order to play unknown or unresolved puzzles that are left behind when the story progresses. After completing the game, several other puzzle challenges become available as bonuses, much more difficult than the main puzzles of the game. When the player has completed all the puzzles within the game, a final puzzle is revealed. Players can also access a number of bonus features depending on how many picarats they have accumulated throughout the game.
‹
›
Home
View web version