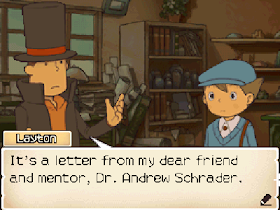 Genre: Puzzle
Perspective: 1st-person
Narrative: Detective / Mystery
Published by: Nintendo of America Inc
Developed by: Level-5 Inc
Released: 2007
Platform: Nintendo DS (NDS)
Professor Layton and his apprentice Luke receive a mysterious letter. It describes that London has become an inhospitable place, insecure and ruled by the forces of evil. The most mysterious part of the letter is the one that refers to all that is happening in the future, not today, specifically in ten years, and the writer of the letter reveals himself as Luke in ten years . Following this, the teacher and his apprentice go to the place they are mentioned in the letter to discover what is happening and help the Luke of the future to save London from the threat that looms over him.
Professor Layton and his apprentice Luke go to the place where he sends them a letter sent by Luke from the future when he is ten years older, a watchmaking almost abandoned. Without knowing how, somehow they travel in time to the future: to London within ten years. There they begin to investigate and to follow the trail of the Luke of the future.
Finally, when they meet him, he tells them all the details of what happens. A few weeks before the present a little-known scientist invited a party to the brightest minds in the world and the best-known characters to present their own invention: a time machine. Using as a volunteer the prime minister of London initiates it. But an unforeseen event occurs and, after exploding, the prime minister and the scientist disappear leaving only pieces of the machine. After this event, in the following weeks scientists from all over began to disappear and Professor Layton became obsessed with the idea of ​​building a time machine, he used his intelligence and his cunning in the London underworld in dirty business that produced him considerable benefits until little by little it took control of the city. Now, in the London of ten years from now where all this has happened, Professor Layton, Luke and the Luke of the future do everything possible to disrupt Layton's plans for the future. While investigating, Layton begins to suspect that the explosion of the time machine at the party and one that occurred ten years ago in which his girlfriend died are related, since both cases arose from trying to operate a machine weather. When finally they manage to arrive until the Layton professor of the future, the one of the present time finishes deducting that this is an impostor, and that in fact is the scientist who produced the explosion in the actuality, and who still followed obsessed with experimenting with the time ... But after rethinking the events, it is discovered that the Luke of the future is no more than an impostor, and that the London of the future in which they find themselves is nothing more than a recreation that is underground in a gigantic cavern . The real Luke is a boy who lost his parents with the first explosion of the past, and since then seeks revenge for his cause: the prime minister, since then passed himself off as a friend of Dimitri (the scientist) to meet their own goals : destroy London so that everything starts again as it should. Professor Layton, with the help of his archenemy, Don Paolo and Celeste (Claire's younger sister, the teacher's deceased girlfriend), Luke and Flora stops him. At the end of the story the fake Luke ends up being stopped by the law and his plans broken ... And a new truth is revealed: Dimitri was trying to build a time machine to make Claire live because she never died. When the oldest explosion occurred, the machine that was trying to operate was effective and sent Claire to the present time ... but little by little her body struggles to return to the moment in which the explosion occurred. After this revelation, Claire says goodbye to the teacher forever and finally disappears.
Days later, Luke moves because his father's business requires it. After a period of time without defining the teacher receives a letter from him telling him that something strange has happened ...
‹
›
Home
View web version