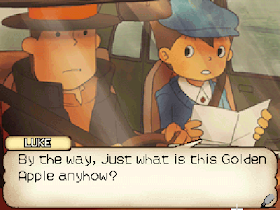 Genre: Puzzle
Perspective: 1st-person, 3rd-person
Visual: 2D scrolling, Fixed / Flip-screen
Interface: Point and Select
Setting: Europe
Narrative: Detective / Mystery
Published by: Nintendo of America Inc
Developed by: Level-5 Inc
Released: 2007
Platform: Nintendo DS (NDS)
The game tells the story of archeology professor Herschel Leighton and his student Luke Trayton. Leighton, as a well-known detective, is invited to the town of St. Mystir to investigate the mysterious testament of Baron August, who bequeathed his whole inheritance to anyone who would find a certain "Golden Apple". The player, controlling the professor, explores the town, communicates with its inhabitants and tries to solve the mystery of the mysterious legacy. Citizens often ask strangers riddles that the player has to solve. A fair amount of playing time is given to solving riddles.
The game was praised by critics, received several awards, it was accompanied by a major commercial success. Over a million copies of the game were sold on the territory of Japan, and after being localized in the world, more than three million were sold, thereby occupying the 17th place among the best-selling games on the Nintendo DS and the second among the games released in 2007.

The game takes place in the quest mode, but is often interrupted by solving small puzzles. The professor and his student explore the city in search of the mysterious Golden Apple, which the recently deceased Baron Augustus bequeathed to the one who first finds it. Heroes move to specific areas of the city; they open gradually as you move through the plot. Locals love to set tasks, and often when trying to talk to a city dweller, he thinks about one of them. At this point, the game enters puzzle solving mode, where the task text is displayed on the upper screen, and puzzle elements are presented on the lower screen, or just an illustration, if the puzzle requires a written answer — you need to use the stylus to solve it in one way or another. Puzzles can be completely variegated: these are chess puzzles, puzzles like “pyatnashka”, and ordinary puzzles and various other varieties. Puzzles play a key role - it often happens that in order to go to a new area or get important information, you have to solve another problem. However, most of the mysteries are not mandatory, and many of them are simply hidden among the urban architecture. Searching the city streets, the player, in addition to hidden puzzles, can find "tip coins." They can be used in solving puzzles to buy text hints, if the puzzle is difficult for the player. All found (solved and unresolved) puzzles are added to the catalog: the player can solve any of them again by selecting the appropriate item in the game menu.
In addition to these two main modes, in certain moments, access to three additional mini-games. The first is an assembly of some mechanism of individual parts, the second player is given the opportunity to furnish the rooms of Leighton and Luke in a hotel, taking into account their taste preferences, and finally, the third is a classic puzzle. All elements for these mini-games are awarded for solving puzzles, including hidden ones.

The soundtrack to the game was written by Tomohito Nishiura. The main instrument in musical compositions is the accordion, which sets the main theme in most game tunes. Also such instruments as bells, flute, xylophone, and violin were involved, which is quite unusual for gaming soundtracks and creates an original atmosphere. However, although the musical accompaniment rather organically emphasizes the style of the game, it was criticized by both the game and the music observers, who referred to its monotony.
December 24, 2008 soundtrack was released in Japan. It included all the musical compositions of the game, as well as arrangements of some melodies recorded by the composer Norikhito Sumitomo, and orchestral versions of individual tracks performed by Layton Grand Caravan Orchestra.
‹
›
Home
View web version