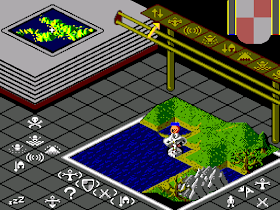 Genre: Strategy / Tactics
Perspective: Bird's-eye view
Visual: Isometric
Gameplay: Managerial / Business Simulation
Pacing: Real-Time
Published by: Electronic Arts
Developed by: Bullfrog Productions
Released: 1991
Platforms: SEGA Master System, SEGA Genesis / Mega Drive
The main window in the game is viewed in an isometric perspective and is located in the “table top”, which also contains a world map (depicted as an open book), a slider that measures the level of divine power (mana) of the player.
The game consists of 500 mission levels. The level is the territory where the followers of the player and the followers of the hostile deity live. In order to proceed to the next level, the player must destroy the enemy "church". To destroy the enemy, you need a certain threshold number of your followers. This is done by divine power.
The game has a number of landscapes, in particular: desert, rocks and lava, snow and ice, etc. Different landscapes have a different impact on the development of the “church” of the player and the “church” of the enemy.
The main means available to the player for influencing gaming reality is a change in the landscape (raising and lowering the ground). This helps to level the ground for subsequent building up followers of the player. Buildings are needed to increase the number of followers of the player and his strength.
Increasing the amount of mana opens up additional forces for the player, which expands the player's capabilities. So the player will be able to cause earthquakes, create volcanoes, etc., as well as turn ordinary followers into more powerful knights.
‹
›
Home
View web version