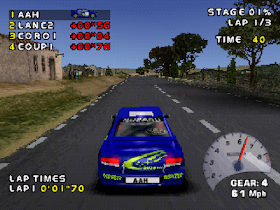 Genre: Racing / Driving, Simulation, Sports
Perspective: 1st-person, Behind view
Gameplay: Arcade, Vehicle Simulator
Vehicular: Automobile, Off-roading, Track Racing
Published by: Electronic Arts
Developed by: Infogrames Europe SA
Released: 1999
Platform: PlayStation (PSX, PS1)
Her first version caused disappointment, and V-Rally 2 appeared to correct this situation. From the very beginning, you need to tune in a serious way. If you are bored with an extensive collection of super runs (and there are as many as 92!), Then you can rush along the rural road. To do this, you have to leave only one car in the game, and the rest (the ones you like) need to be saved to the memory card. And you can also use the in-game first-class editor of the tracks, which allows you to build something quite suitable from a small number of elements in a matter of seconds. Now you can play the four of us, without connecting the two consoles together, but by dividing the screen into four parts and using Multi-Tap. And with the Dual Shock adjustment, the game works perfectly at all. Each slightest adjustment occurs instantly and significantly affects the movement of the car. But sometimes the speed of the car instantly drops to zero, followed by a short run along the roadside with a terrible shaking. Apparently, the “hot spots” marked on the road for collisions were reflected on the road itself. But all this stuff. The rest of the race V-Rally 2 is a delightful adventure. The tremendous speed, beautiful landscapes, obedient steering wheel - all this is simply breathtaking and gives the impression of the absolute reality of what is happening. The car glides superbly, obediently gives reverse gear, can turn over, and at the same time its damages become visible. Trails sometimes split in two, but never end in a dead end. You never stop racing just because you scratched a wing on a wire fence. Drive the entire championship track is not so difficult. The player is offered 18 licensed cars, and in the future you can open another 10, including Lancia Stratos. In terms of technical characteristics, V-Rally 2 is undoubtedly a good rally game for the PlayStation.

All cars and trophies

When the title screen appears, press L1, R1, Left, Right, Left, Right, Up, Down, Up, Down, X, X + Select. If the code is entered correctly, you will hear a sound. Then select the empty square and press X to get the corresponding car and "trophy".
‹
›
Home
View web version