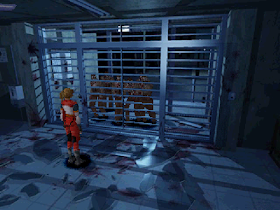 Genre: Action
Perspective: 3rd-person
Visual: Cinematic camera
Gameplay: Puzzle elements, Shooter, Survival Horror
Narrative: Horror
Published by: Capcom Entertainment
Developed by: Capcom Co.
Released: 1997 / 2013
Platform: PlayStation (PSX, PS1)
In 1996, the first part of the Bio Hazard series was released in Japan, which common name Resident Evil in the US and Europe. Inspired by the incredible success and excellent sales, the developers almost immediately make a statement about the beginning of work on the sequel, and in the fall of 1996, the first ideas were demonstrated at the Tokyo Game Show. The release of the game was originally scheduled for March 1997, but due to the "dampness", moved to the winter of the same year, and then to the spring of 1998.
The game appeared on store shelves, as promised, in the spring of 1998, but for all those who closely followed this project, saw early trailers and screenshots, read descriptions in the press, attended game shows, it becomes obvious that this is not the game which they have been waiting for. The released game was strikingly different from everything that was shown to the public in 1996 and 1997. Questions began to arise and soon in one of the interviews, the developers admitted that when the project was 65% ready (in fact, the readiness percentage was 80%) they decided to start developing the game from scratch. The reason for such a strange act, according to the game's producer, Shinji Mikami, was the weak graphics and strong resemblance to the first part, both in terms of gameplay, and in terms of graphics. At the end of 1998, the Bio Hazard Director's Cut Dual Shock Version was released, which included the Bio Hazard Complete CD, among other things, containing four videos about Bio Hazard 2 (Prototype) (this is how the developers dubbed the original game), which further fueled interest in the earlier version.
Despite the fact that the released version fully met the expectations of gamers and certainly was an order of magnitude better than its prototype, many wanted to personally try out Bio Hazard 2 (Prototype) (some people call the game Bio Hazard 1.5, which, in principle, is also not an error) since it was attended by many interesting elements: monsters, weapons, locations, characters, as well as scenes and dialogues that were not included in the final product.
As you have probably already noticed, the game should have been released, like the first part, on one CD. The scenarios of Leon and Elza were selected by means of the scenario selection menu at the very beginning of the game.
Leon’s screenplay begins on the roof of the police station, and Elza’s at the police station reception desk, right next to the main entrance.
‹
›
Home
View web version